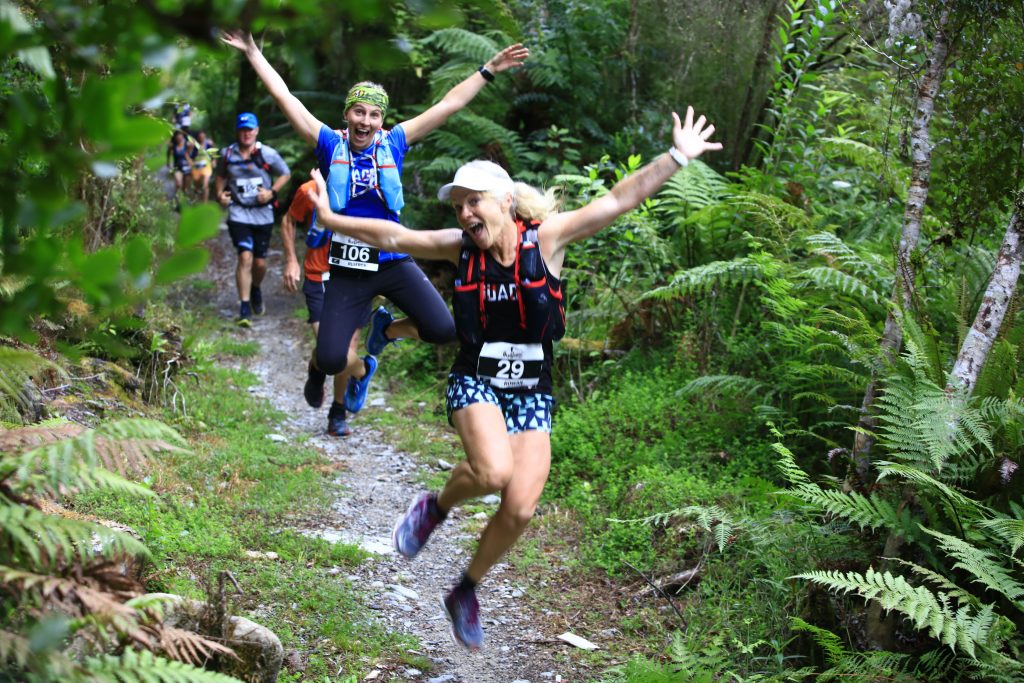 Coming into the second aid station at 42km meant we were half way, with the hard half still to come.  It had taken 5.5 hours to reach Stern Valley, again well within cut off.  This is where the drop bags were, and I took the opportunity to change into a dry top and bra, and re-tape my chaffing spots!  I topped up my soft flasks with water and tailwind and enjoyed a big peach that I had put in my drop bag.  It was so good!  Karen changed shoes, and we were about to head off when a helicopter arrived.  We thought it might be Ali and Maree (from Squadrun) who were going to be tail end charlies.  It wasthem, and Lucy Bartholemew, who had come to run the second half of the course as a training run.  We gave Ali and Maree hugs, then I told Karen I wanted a photo with Lucy.  I think she is such a lovely and positive woman and a great role model, especially for young girls.  I thought my daughter would get a buzz out of seeing a photo of me and her!  Lucy happily obliged and we set off again. Lucy ran with us and chatted for about 5 minutes before she carried on ahead to do the same with other runners no doubt.  Such a cool thing for her to do!  She had decided not to race due to her massive efforts at Tarawera Ultra 60km (1st woman, 3rd overall) and the Shotover Moonlight Marathon (1st woman) in the two weeks prior. 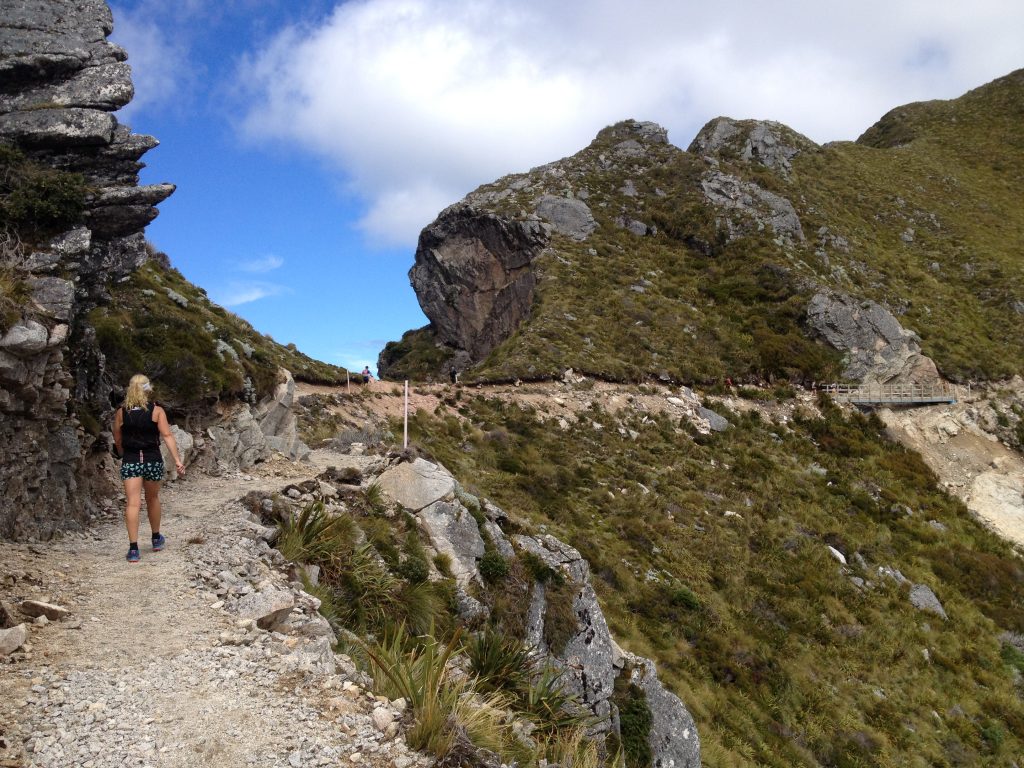 It was 13km or so until the next aid station at Ghost Lake Hut, but it involved a lot of climbing.  This section is where you get the amazing views along the Skyline Ridge, climb a lot of stairs and really get to marvel at the effort that has gone into building this track.  I could see where my funds were going which was choice.  Ghost Lake aid station at 55km was great with more extremely helpful volunteers and whitebait fritters!  I hoped it wasn’t going to disagree with me as I tucked into one (it was fine, thankfully!).  We knew we still had a bit more climbing to do from there, but then it leveled out again and it was just about putting one foot in front of the other.  Around 65km’s in we saw Nicki who had come up from the end on her bike.  She plodded along with us for a bit, then biked along for a bit and took a couple of photos.  The finish line seemed so close, yet so far away!  The last 12km finally felt like the downhill we had been waiting for, although very gradual.  It still felt like an effort, but I knew that if i stopped it would be hard to start again. 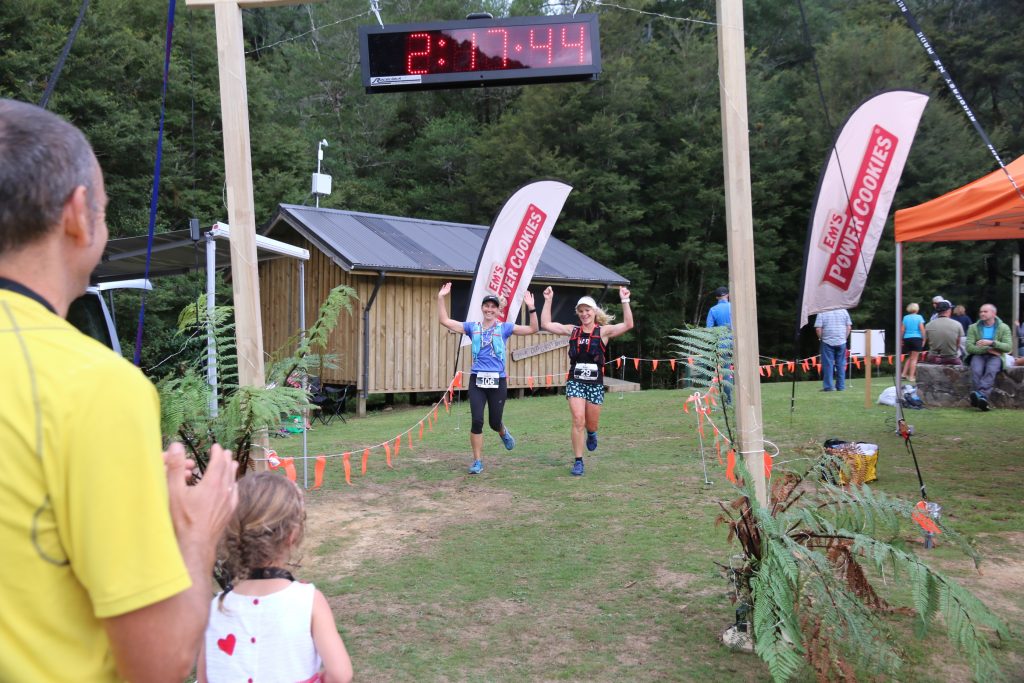 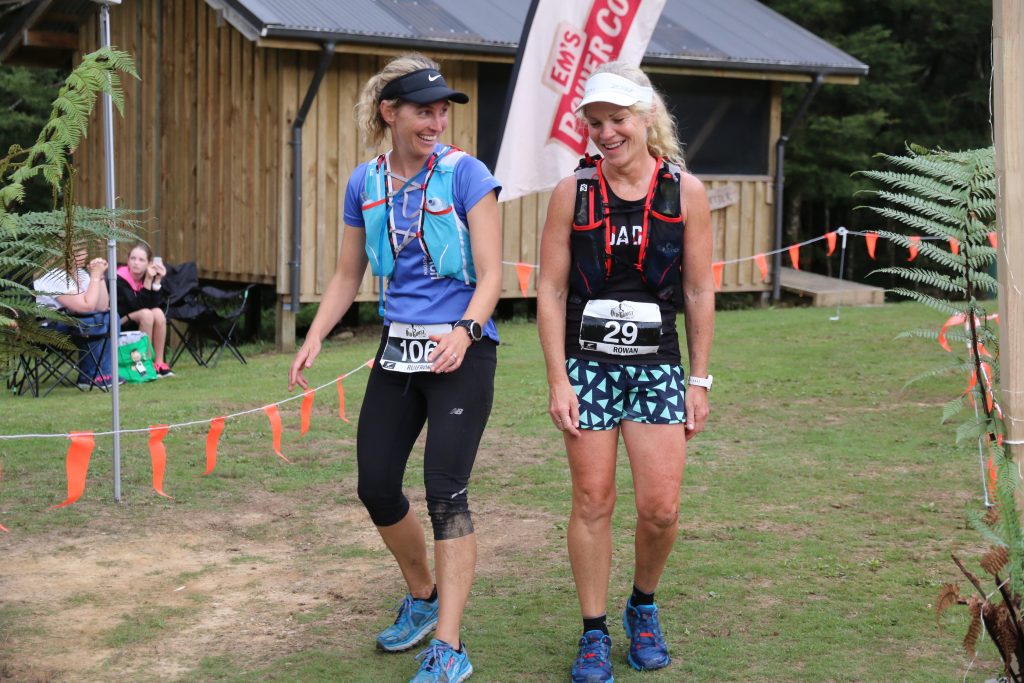 Karen and I finished together in 12 hours 17 minutes.  She wanted to do cartwheels over the finish line.  I agreed, but when we got there I was worried we were going to kick each other in the face if we did them at the same time so we did them one after the other.  Cool way to finish an epic event!
We slowly made our way down to the river to soak our aching bodies in the icy cold water.  It was so so cold, I couldn’t bear to go all the way under like Karen and Nicki did!  But it was so nice on the legs.
The next morning at prizegiving, I was kind of expecting to be called up to stand next to Kerry, but what actually happened is Phil asked 3 of us who had done fundraising to come up and talk about our story!  I have never spoken to a crowd like that before and I think it was more scary than running 85km!  I managed to get some words out without fainting and I truly meant it when I said that the track is an incredible feat of craftsmanship and the money raised is going to a fantastic group of volunteers.
Thank you to Squadrun, the team at Old Ghost Ultra and all who got behind me and the cause.  I feel privileged to have had this amazing opportunity.
Helayna x